Competition heating up in fintech sector

“Disrupt or you will be disrupted.”

The race for fintech, the convergence of technology and finance, is heating up globally, as innovative minds from outside the traditional realm of finance rush to develop new services and products that promise to change the way finance works.

Not to be upended by disruptive newcomers, traditional financial giants are trying to embrace technology through partnerships or investments in fintech start-ups.

For Korea, this global phenomenon presents some new business opportunities that combine the country’s high smartphone penetration rate and solid ICT infrastructure, officials from the government and industry say.

The year 2016 will likely see Korea building a momentum for the fintech revolution, some experts predict.

“The launch of the Internet-only banks will be Korea’s very first significant case in which the convergence between ICT and finance takes form,” Kim Kun-woo, an analyst at LG Economic Research Institute said in a research note. “It might pave the way for financial innovation in Korea,” he said.

Tentatively named Kakao Bank and K-Bank, the online banks, expected to debut in the first half of 2016, will be the first new entrants in Korea’s heavily-regulated commercial banking sector in more than two decades.

In a milestone decision in November, the financial regulator gave preliminary approval to two consortiums led by the fast-growing mobile giant Kakao and telecom operator KT Corp. to start banks that only exist in cyberspace.

Free of the brick-and-mortar branches, the banks, once launched, are expected to lower costs and introduce new products and services optimized for the mobile platform. Kakao, which is poised to launch Kakao Bank together with other companies, runs a mobile messenger app that is almost ubiquitous among smartphone users in Korea.

Allowing Internet-only banks to exist was among the key policy steps laid out by the Korean government in 2015 for the purpose of nurturing local fintech start-ups and boosting fintech adoption.

Korea, with its president bent on nurturing creative new industries for future economic growth, pushed for financial reform and deregulation to clear any stumbling blocks to the local fintech takeoff. According to the Financial Services Commission, it has abolished a total of 211 direct or indirect regulations in 2015 alone.

“Tight regulations had constrained the rise of fintech in Korea,” said Kim Jae-pil, a researcher at KT Economic Research Institute, adding that there were other attributable factors.

In the mobile payment segment, a key area where the upstarts are providing new solutions globally, the wide use of convenient options for credit card holders had prevented innovations in Korea, he explained.

The Korean government’s efforts appear to be bearing some fruit.

Fintech start-ups registered with the Korea Fintech Forum, an industry association, surged from 44 in May to 360 in November, a ninefold increase in just six months.

The number of companies registered as an electronic financial business operator as required by law moved from 67 at the end of 2014 to 84 in November.

In another key development in the payment segment, Samsung Electronics, Korea’s towering electronics giant, entered the field with the launch of Samsung Pay in August last year. The company is currently in the process of rolling out the solution, installed on its select smartphone models, to overseas markets.

Globally, the U.S. and the U.K. are seen as leaders in fintech, with Hong Kong fast emerging as a regional center. The playground for fintech players is vast, ranging from mobile payments, automated investing, peer-to-peer lending to blockchain, a software ledger that records all financial transactions executed for a particular asset.

In Korea, bio-authentication is another area drawing keen interest as security concerns grow in light with the coming wave of digital disruption. 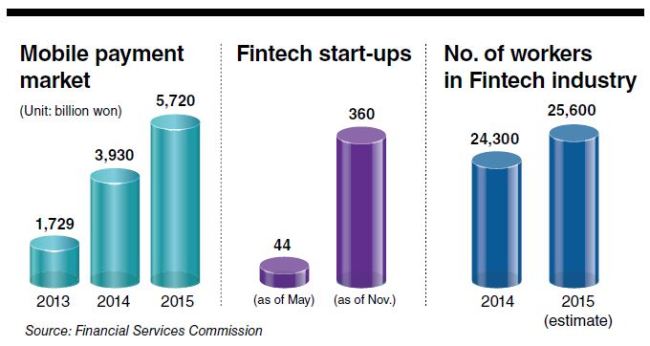 Traditional players facing up to the challenge

Last year’s fintech boom has kept traditional financial players on edge. Warnings rang loudly in the banking sector in particular that those who bungle this tech transition may go down in history, with former Barclays CEO Antony Jenkins foreseeing “the Uber moment” for banking which he said would lead to hundreds of branch closures and massive layoffs.

To face up to the challenge, Goldman Sachs and some other early movers have started to offer more technology-based services, while seeking partnerships or investments in the start-ups that are driving the change. They include Korean companies, like Shinhan Financial Group.

Shinhan, whose business spreads from commercial banking, brokerage, credit cards to life insurance, has launched a mentoring program for fintech start-ups called Future’s Lab, through which it identifies promising companies for future investment.

“Through KB Fintech Hub Center, we plan to contribute to the advancement of fintech in Korea and at the same time gain an upper hand in fintech through direct investments in those start-ups,” a KB Financial Group official said.

NH Financial Group is taking one step further, opening up part of its banking platform for fintech start-ups through an API, or application programming interface.

The group has signed an agreement with some 20 firms, allowing them to develop various financial services and products using the “NH Fintech Open Platform.”

“Like Google opened the Google Maps API and paved the way for many new applications based on Google Maps, we hope this project would lead to the introduction of various new financial services by fintech companies,” NH Financial Group said.

Business Services, Made In Korea News, News
Competition heating up in fintech sector