The Korean cosmetics industry will continue to be a bright spot for investors as companies continue to expand overseas beyond the Asian market with strong sales of skin care products at duty-free shops abroad expected to underpin strong growth, analysts said.

Despite concerns about the continued economic uncertainty in China, the largest market for Korean beauty products, the recent devaluation of the yuan and Chinese government’s policy shift to a domestic consumption-driven economy will have limited impact on the firms listed on Korea’s main bourse, the KOSPI, she said. 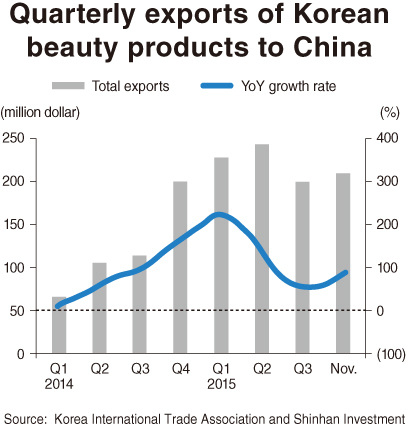 Chinese travelers has been the biggest driver of cosmetics growth in Korea mainly through duty-free channels.

“Sales and operating rates will likely to fall short of the market consensus but it’s not a worrisome factor as the lower-than-expected results are due to one-time expenses such as new investments and incentives,” Yang said.

The firms’ expansion of their exports and overseas business beyond Asian market makes analysts upbeat on them.

Korea’s exports of cosmetics touched an all-time high of $719.34 million in the fourth quarter in 2015. The country logged $240 million in beauty product exports in December, up 25.3 percent from a year earlier, according to data from the Korea Customs Service.

Buoyed by a growing interest in Korean skin care products, the export growth is spreading from the limited Asian markets into other new territories such as North America.

In December, cosmetics exports to China totaled $109 million while exports to the U.S. stood at $19 million, up 42.2 percent and 63.9 percent on-year, respectively.

“Large cosmetics companies including AmorePacific, will aggressively target North American market this year and the move will help them make a huge leap,” Seo Young-hwa, an analyst at Kyobo Securities.

Riding high on huge demand in China, market capitalization of Korea’s largest cosmetics firm AmorePacific rose to sixth position from 15th on KOSPI over a year.

“Despite a high base effect from the strong growth over the past two years, AmorePacific continues to show the most significant growth in the sector,” said Daishin Securities’ researcher Park Shin-ae who raised its target price from 480,000 won ($396) to 540,000 won, representing a 42 percent rise from its share price on Monday.

Cosmetics original equipment manufacturers Cosmax and Korea Kolmar are also showing a strong uptrend in the domestic market while Chinese local firms are placing more orders as their market share is growing at a fast clip.

Experts said the massive expansion of the two firm’s factories in Shanghai and Guangzhou will boost growth potential while projecting that Cosmax will log over 150 percent jump in Q4 operating profit.

In recent reports, KB and Kyobo chose AmorePacific and Cosmax as their top-picks, citing their strong overseas sales.