Joining hands with global partners, South Korean pharmaceutical companies are increasing their presence in the global health care industry by stepping off their home turf and venturing to bigger markets.

Korean pharmaceutical companies, which are gaining recognition overseas for their new drug development capabilities, are partnering with a growing number of internationally renowned pharmaceutical giants to export their newly developed drugs with more success.

Earlier this month, Hanmi Pharmaceutical sealed an exclusive license and collaboration agreement, valued at around $730 million, with Germany’s Boehringer Ingelheim, to sell the development and global commercialization rights to its third-generation lung cancer treatment drug HM61713.

The company had inked a similar licensing deal, valued at about $690 million, with U.S.-based Eli Lilly and Company in March to export its autoimmune disease treatment HM71224, a drug entering phase II of clinical trials.

“With its specialized commercialization teams and its well-established distribution networks, Zuellig Pharma is the right partner to develop the Asian market,” Boryung president Choi Tae-hong had said, emphasizing the need for local firms to team up with foreign-based industry giants to spearhead their entry into broader markets abroad.

Kanarb — a blockbuster drug launched with 12 years of research and development and roughly 50 billion won ($41.7 million) in investment — will be marketed and sold by Zuellig in Indonesia, Malaysia, the Philippines, Singapore, Thailand and Vietnam starting next year.

Industry watchers say that such global-local partnerships have existed in the past, but the difference today is that such ties are expanding in scale and numbers, as global firms look to bolster research and development and business partnerships with Korean firms, which are seeking new growth engines and opportunities overseas. 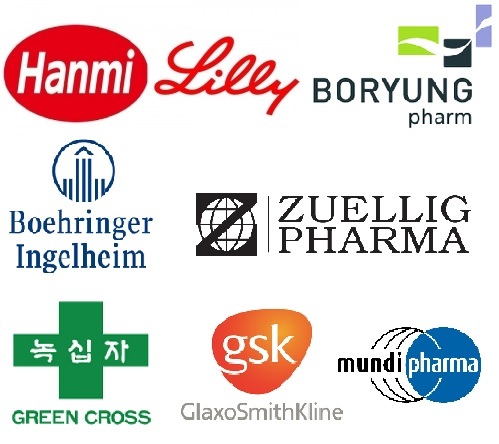 Dong-A ST’s antibacterial drug Sivextro, which received its sales approval from the U.S. Food and Drug Administration in February, is being sold across Asia by global pharma giant Bayer, through an export deal signed in 2012.

Other multinational pharmaceutical corporations including U.K.-based Munipharma, GlaxoSmithKline and Merck Sharp & Dohme, as well as France’s Sanofi, have also established business ties over the past couple years to bring Korean drugs into global markets.

Such business alliances are expected to grow in the coming years, as Korean pharmaceutical companies vamp up their global competitiveness by channeling their R&D capabilities into developing new, original drugs as well as biosimilars — lower-cost copies of brand-name biologic drugs that have lost patent protection.

Celltrion, the top-listed company on Korea’s tech-savvy KOSDAQ market, as well as the conglomerate’s biopharmaceutical R&D unit Samsung Bioepis have been making significant strides in the global biologics industry by introducing competition to a market long dominated by big-name drugmakers such as Roche, Pfizer and Johnson & Johnson.

Celltrion has already joined hands with U.S.-based pharmaceutical giant Hospira to distribute and sell Remsima — its biosimilar replication of the world’s No. 3 best-selling rheumatoid arthritis treatment drug Remicade — to markets in Europe and Australia.

Samsung Bioepis also entered an agreement with MSD in 2013 to commercialize its biosimilar drugs, in a bid to establish a stable marketing channel for the company to carry out its business globally.

Meanwhile, industry data shows that Korean pharmaceutical firms have stepped up their exports in recent years. Total exports of Korea-made drugs stood at 2.4 billion won in 2014, up by 13.5 percent compared to 2.1 billion won recorded the previous year, according to the Ministry of Food and Drug Safety.

In the first half of 2015, Green Cross and Hanmi Pharmaceutical’s export volume each surpassed 100 billion won for the first time ever, according to the firms’ regulatory filings.