Korea rises to No.6 exporter 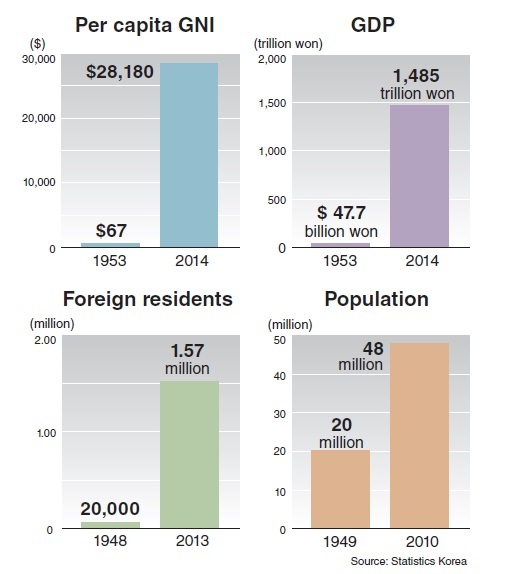 According to a special edition published by Statistics Korea to celebrate the 70th anniversary of Liberation Day, Korea’s exports increased from $25 million in 1956 to $572.7 billion in 2014.

The nation recently overtook France in export volume, but continued to lag behind China, the U.S., Germany, Japan and the Netherlands.

Korea ranked eighth in trade volume — both exports and imports — with $1.09 trillion in 2014. The country accounted for 2.9 percent of the world’s total trade.

But its high trade dependence also leaves the export-driven country vulnerable to the volatility of global economic factors such as the situation in its export destinations and geopolitical risks among its raw material trade partners. Korea saw its degree of trade dependence surge to 99.5 percent in 2014, compared to 15.2 percent in 1956.

Women’s participation in economic activities has also gradually increased over the past few decades. The female labor force participation rate which was 37 percent in 1963, climbed to 51.1 percent in 2014. The employment rate of women also rose from 34.3 percent to 49.5 percent over the same period.

Economy
Korea rises to No.6 exporter