Korea to expand FTA network to offset US protectionism

South Korea’s policymakers are scrambling to cope with rapid changes in global trade conditions as new US President Donald Trump has put into practice his protectionist pledges.

Measures drawn up at their meeting last week focused on expanding the country’s network of free trade agreements with the rest of the world, increasing imports from the US and winning more contracts to build massive infrastructure facilities abroad.

An escalation in the trade conflict between the US and China, Korea’s two biggest trading partners, would significantly harm Asia’s fourth-largest economy.

The possibility also looms larger that the Trump administration may seek to revise the bilateral free trade accord with Seoul following its moves to withdraw from the US-brokered Trans-Pacific Partnership deal and launch renegotiation on the North American Free Trade Agreement with Canada and Mexico.

“South Korea should draw up a new strategy suited for the drastically changing trade environment,” said Choi Byung-il, a professor at the Graduate School of International Studies at Ewha Womans University.

Trade officials here say the US withdrawal from the 12-nation TPP is not necessarily bad for Korea, which was excluded from the group of the pact’s founding members.

They are planning to accelerate trade talks with Mexico and Japan, the only two TPP members with which Korea has no bilateral trade accord in place.

Korea will also push to open negotiations with a regional trade bloc in South America and the Russia-led Eurasian Economic Union while trying to put into practice a trade accord with Central American countries and conclude ongoing free trade talks with Israel and Ecuador as soon as possible.

In addition, the country is seeking to hold additional negotiations with Chile, India and the 10-member Association of Southeast Asian Nations to increase the liberalization set by existing free trade agreements with them.

The rattling of multilateral trade regimes in the wake of Trump’s inauguration may put Korea in a relatively advantageous position as it has continued to expand the network of bilateral trade deals with its trading partners around the world over the past decade.

According to the Ministry of Trade, Industry and Energy, Korea has so far concluded 15 free trade pacts with individual countries and economic blocs, which account for 77 percent of global gross domestic product.

Some experts note it is unlikely that China will assume a leading role in setting up a regional trade scheme to fill the vacuum created by a receding US leadership despite President Xi Jinping’s defense of globalization in his speech at Davos, Switzerland, last month.

China has only halfheartedly pursued some alternatives to the TPP, from which it was excluded from the outset. It is expected to continue to pursue bilateral trade pacts with regional countries, using commerce as a tool of retaliation as shown by its economic pressure on Seoul pushing ahead with the deployment of an advanced US missile defense system here.

In the chaotic situation prompted by Trump’s protectionist moves, Korea will do well to gird for a possible renegotiation of its free trade deal with the US, which took effect in 2012.

Experts say Korea should be more proactive in convincing the Trump administration of the benefits of the Korea-US trade deal. In the first four years of its implementation, bilateral commerce between the two sides increased 14.9 percent, while global trade decreased 6.1 percent over the cited period. The US share of Korea’s imports grew from 8.5 percent to 11 percent and the corresponding figure for Korean exporters to US markets rose from 2.6 percent to 3.4 percent during the same period. 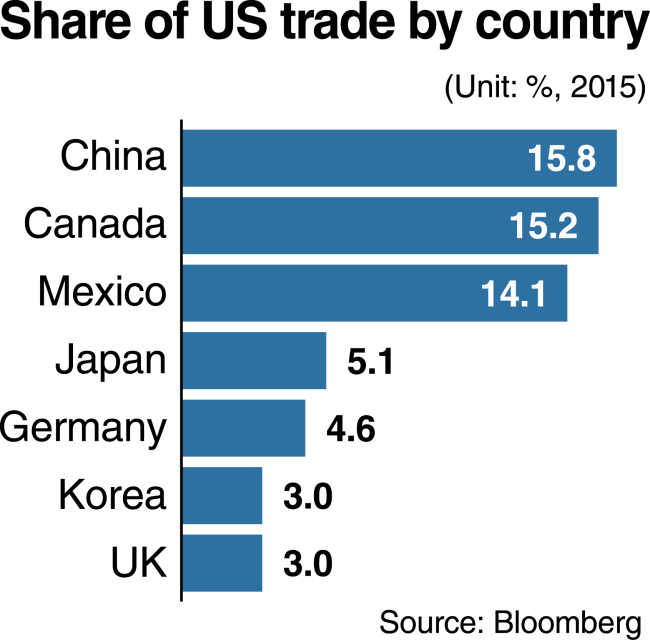 Korea is also considering importing more US industrial products and shale gas to reduce its trade surplus with the US, which amounted to $23.3 billion last year. Decreasing the surplus is needed to lessen the possibility of the Trump administration designating Korea as a currency manipulator in April, in a move likely to lead to demanding a renegotiation of the bilateral trade accord.

Former Trade Minister Kim Jong-hoon said Korea should be prepared to use a possible renegotiation as an occasion to upgrade the trade relationship with the world’s largest economy, based on an accurate and objective assessment of the effect of the trade deal.

Experts say there is a need to strengthen the trade negotiating arm of the government to take on growing challenges posed by changes in the global trading system.

They recommend the trade negotiating office, currently under the oversight of a vice minister of trade and industry, be made into an independent ministerial-level organization.

In a recent meeting with reporters, Trade and Industry Minister Joo Hyung-hwan took a negative view of the idea, saying the current system has functioned smoothly to handle pending trade issues. His remarks, however, were greeted with skepticism by many experts, who see Seoul’s response as too easy and passive.

A ministry official, who spoke on condition of anonymity, conceded that upgrading the trade office would help ensure negotiators sharpen their expertise and handle their work in a more responsible and far-sighted manner.

Experts also say Korea needs to increase the number of commercial and financial attaches at its overseas missions, most of whose staff engage in diplomatic and political affairs.