Industrial output grew 2.5 percent in February over the previous month, marking the highest monthly increase in three years and 11 months, according to data by the state-run statistics agency.

The monthly rebound, which was mostly attributable to increased production demand for automobiles and semiconductors ― the country’s two key export items ― came after a contraction of 2 percent in January. 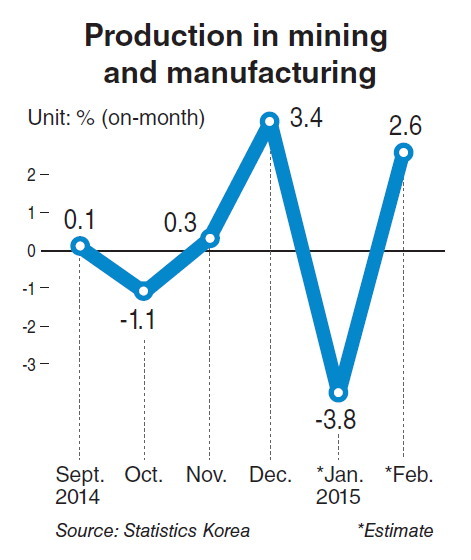 The statistics bureau also noted that the low level of industrial output in January, or the base effect, and the effect of the Lunar New Year holiday boosted Korea’s industrial production in February.

Last month’s increase marked the highest since March 2011, when it stood at 4 percent.

Production in mining, manufacturing and utilities increased 2.6 percent in the same period, rebounding after two months of contraction. In January, production dropped 3.7 percent.

Automobile production increased 4.6 percent and semiconductors rose 6.6 percent in February, from the previous month. The production of automobiles accounted for almost a third of industrial output, as it is connected to other areas of businesses, including financing and auto parts.

Meanwhile, the output of chemicals dropped 2.3 percent and transportation machinery slid 3 percent in the same period.

The service sector saw a production decline, with the arts, sports and leisure sectors dropping almost 3 percent, while broadcasting and publishing slid 0.4 percent.