Throughout history, kimchi has held a defining presence in South Korea’s culinary scene. The beloved spicy, fermented vegetable dish is eaten with almost every meal and the culture of communal kimchi-making has stood as an emblem of traditional culture.

Amid demographic shifts, a growing number of Koreans are choosing to purchase ready-to-eat kimchi, as they shy away from what can be a cumbersome task of making it from scratch and storing it.

As the domestic packaged kimchi segment has evolved to form a major industry valued at an estimated 22.2 billion won ($19 million), kimchi brands are closely eyeing the changing preferences of modern consumers, reformulating or upgrading their products in line with shifting consumption patterns.

The three key defining trends leading today’s packaged kimchi industry are “small size,” “diversity” and “low-sodium,” according to Daesang FNF, the owner of the kimchi brand Chongga, which takes up more than 65 percent of the Korean market.

“The most noticeable change is an increase in demand for smaller-sized kimchi packs under 1.5 kg, as those who live alone prefer to purchase kimchi in smaller portions,” a Daesang FNF spokesperson told The Korea Herald.

Single-person households accounted for 26.5 percent of Korea’s total population this year, up from just 15.6 percent in 2000, transforming the landscape of the local consumer goods sector, according to a 2015 report by Hyundai Research Institute.

“Small-sized kimchi products make up the majority of our offline sales, though large packs remain a popular option for online orders,” said the Daesang FNF official

Dongwon F&B — which sells packaged kimchi under its processed food brand Yangban, No. 5 in the market — said it was “concentrating on developing and diversifying its under-1 kg products,” which currently take up 58.7 percent of the firm’s total kimchi sales.

“Customers today can select a kimchi style according to preference (as kimchi is made differently according to region) and choose from various types including nonspicy or ‘white’ kimchi and green onion kimchi, among others,” said Daesang FNF. 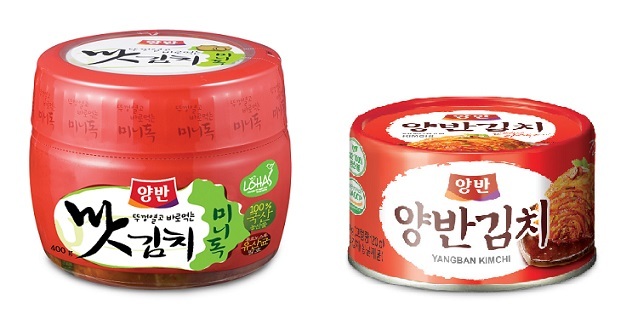 Developed exclusively by CJ, Bibigo Koryo Cabbage Kimchi is made with regular green cabbages instead of napa cabbages. Available in two flavors, the kimchi is sweetened with yuja preservatives and paprika and spiced with ground jalapenos.

The popularity of CJ’s standout kimchi variety reportedly drove up its share in the local market from just 8.2 percent last year to 14.4 percent this year, according to market researcher Neilsen Korea.

Moreover, while commercial kimchi was only offered in simple plastic bags in the past, it is available today in various packaging types including rectangular plastic containers, resealable bags, cups, cans and even jars developed to mimic a hangari — a Korean baked-clay pot traditionally used to store kimchi.

Packaged kimchi is also taking a turn toward the well-being trend, following a general direction in the food industry toward the development of healthier products with improved nutritional value and made with better ingredients.

Amid concerns regarding the high sodium content of fermented foods, kimchi-makers have been working to introduce healthier kimchi with less salt without comprising taste, utilizing their exclusive fermentation and salting technologies.

“Kimchi low in sodium content and rich in lactic acid bacteria (a healthy bacteria found in fermented foods) and made with premium ingredients will see heightened demand in the coming years,” said a Dongwon F&B spokesperson.