South Korea will maintain its expansionary fiscal policy stance for the time being to prop up economic growth, while taking steps to reduce unnecessary outlays, the government said Wednesday.

The plan comes amid lingering concern over the economy’s performance. Seoul originally set this year’s growth target at 3.8 percent, up from 3.3 percent in 2014, but private economists are skeptical of the goal, citing still flaccid private consumption and slumping exports. 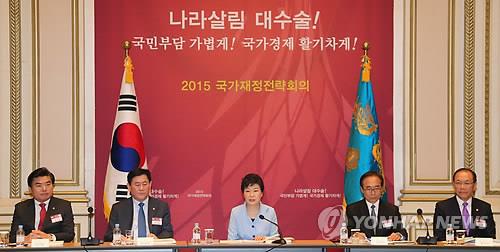 Reporting the plan to the 2015 national fiscal strategy meeting chaired by President Park Geun-hye, the finance ministry said the immediate goal is to frontload as much of this year’s budget in the first half as possible and formulate policies for the second half, based on changes in the economic situation.

The government plans to frontload roughly 59 percent of this year’s budget before June in an effort to provide tailwinds for the growth of Asia’s fourth-largest economy, it said.

“There are signs that things are improving, but the gains are not strong or consistent enough, compelling the government to use the budget to support growth,” said Vice Finance Minister Bang Moon-kyu in a briefing on the fiscal management plan.

For the second half, officials will carefully check to see what progress has been made in the first six months, take into account expected tax earnings and come up with growth-boosting measures, he said.

“If the need arises, the government may consider a supplementary budget, although it can rely on making full use of state-controlled funds and encourage more investment by the private sector, which can allow money to reach the market,” Bang said, making it clear that fiscal spending will be used as a tool to sustain growth.

At the same time, Bang said, the government will push for fiscal reforms that can improve the country’s balance sheet.

“The government will reduce the number of social projects that get state backing by some 10 percent. Some 600 programs that are redundant will be scrapped or merged,” he said.

Savings generated by this pruning process will permit the government to spend more on welfare and social security outlays, as well as help young people find jobs.

Related to helping young people find work, the government said it will give monetary incentives to firms that opt to hire young people as the country gears up to extend the retirement age to 60 in 2016.

The finance ministry said if a company hires a young person for every employee that stays on as a result of the extended retirement age, the state will give monetary compensation that will help defray costs. It said 900,000 won ($820) per month will be given for every new person hired by small and medium enterprises, while the sum will be 450,000 won for large businesses and state-run corporations.

Besides enhancing fiscal health and helping young people find work, the government plans to streamline and trim operations of three state-run corporations — the Korea Land and Housing Corp., the Korea Rural Community Corp. and the Korea Railroad Corp. – and allow private companies to take over some of their operations.

“The ensuing restructuring of state-controlled corporations will focus on reorganization and reallocation of excess personnel,” the official said. “Layoffs of existing employees are not part of the overall plan.”

The government also plans to improve operational efficiency and profits generated by the state pension fund and the large sum of money held by the post office.

It said the principle of “pay-as-you-go” will be introduced for all new spending projects, making it mandatory for all new projects that require state financial support to clearly outline ways that the necessary money will be raised.

Officials said in the past that the lack of a pay-as-you-go system led to a proliferation of development programs that were later scrapped due to funding problems.

The ministry added measures will be taken to increase efficiency in social overhead capital investments, research and development, and money spent to upgrade the country’s cultural infrastructure and the defense sector. (Yonhap)