South Korea: The Center Of The Tech Universe

The only thing quicker than the rise of South Korea’s burgeoning tech scene is the Internet speed it’s being built upon. The question now is: Will the world’s fastest Internet officially make South Korea the center of the tech universe?

That South Korea has the world’s fastest Internet, more than twice the average broadband speed of the United States, is a given. As recently as October 2014, a study showed that the average South Korean enjoyed an Internet speed of 23.6 Megabits per second. 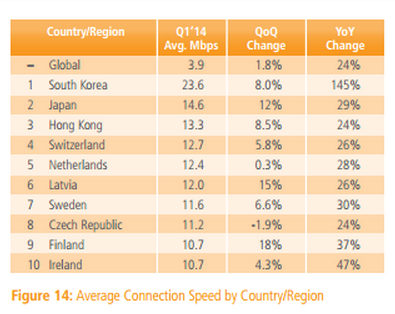 And in the near future, South Korea’s speed looks to become even faster. One of South Korea’s largest ISPs, SK Broadband, recently announced plans to introduce a 10 Gbps connection.

For some perspective, a couple months before SK Broadband’s announcement, 10 Gbps was the world record connection speed over a copper wire. Downloads will go from a couple blinks of an eye to just one.

For the public, the speeds most certainly mean online consumption. The country ranks number one in the world in overall digital content spending per capita.

One in every five South Koreans is connected to a smartphone, and the region is number one in mobile app downloads and number three in app revenue. While the term “addiction” may sound hyperbolic, apparently, tech addiction is a reality in the region.

Tech startups are on the rise in South Korea and have been for years. From 2008 to 2011, South Korea saw an 83 percent uptick in the number of technological startups. Just this year, Bloomberg ranked South Korea number one on its list of the 30 most innovative countries in the world, noting that it was second in patent activity.

In looking at the next step, what could be the next shot in the bloodstream of an already flourishing tech microcosm? Enter the largest ever international hackathon, Global Hackathon: Seoul, set to take place in South Korea’s largest metropolis.

“At the event, all attendees will experience the world’s fastest Internet/mobile connection, meet very talented and enthusiastic people in the tech industry and collaborate with them to work on their ideas.”

Related Link: Global Hackathon: Seoul Will Create An Influx Of Hackathons In Korea

It is actually this merging of the event’s size with the speed of South Korea’s Internet speed that sets it apart from past hackathons and gives such strong implications for the tech world at large. More than 2,000 programmers will descend on Seoul in an attempt to create something truly different, all to the tune of 23.6 Mbps.

And while singular project success would be nice, and maybe even some startup funding even better, the main goal of the hackathon is to promote the very idea of exploring – a beacon of innovation in the tech world shining from what is fast becoming the home base of the technology world.

“South Korea having the worlds’ fastest Internet and mobile speed was the driving force behind South Korea’s technology innovation. And GHS is just a start,” Ahn said. “But we are certain that it will bring an impact to lead to South Korea becoming the center of the tech universe.”

Made In Korea News, News
South Korea: The Center Of The Tech Universe