A new high-speed KTX train service that links Seoul and the nation’s southwestern region was launched Wednesday, amid anticipation that it will help balance development between the regions with shortened traveling times.

The Korea Train Express Honam will travel up to 300 kilometers per hour, cutting the fastest journey time between Seoul’s Yongsan station and Gwangju, 350 kilometers southwest of Seoul, from 157 minutes to 93 minutes. 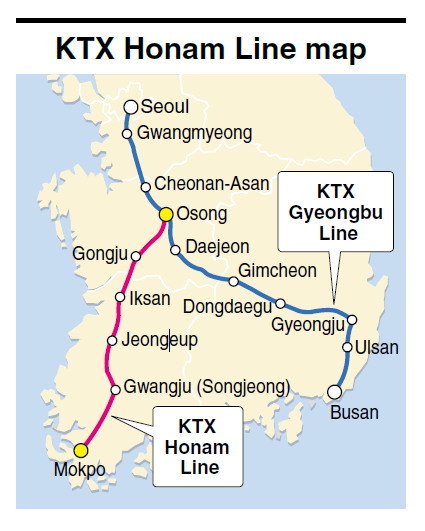 “The opening of the Honam high speed line will mark a milestone in the country’s land and transportation development as it will deliver drastic regional economic growth and accelerate social and cultural exchange,” President Park Geun-hye said during the opening ceremony held at Gwangju Songjeong Station.

“With 25 trillion won worth of economic impact, the Honam high-speed line will promote brisk human exchanges and the relocation of businesses,” she added.

The president also said Gwangju has the opportunity to maximize benefits from the Korea-China free trade agreement as the city can now be reached in three hours from Incheon International Airport.

Diverging at Osong from the Gyeongbu high speed line that links Seoul and Busan, the Honam high-speed line runs for 182 kilometers to Gwangju, serving stations at Gongju, Iksan and Jeongeup.

“The opening of the Honam high speed line is a revolutionary transportation service that enables passengers to travel the country in half of a day,” said Son Byung-suk, director of Railway Bureau at the Transport Ministry.

The southwestern metropolitan city of Gwangju, which has large international and domestic events this year, including the Summer Universiade in July, is expected to benefit the most from the new line due to greater accessibility.

A total of 68 KTX trains will operate on the new tracks. Ticket prices from Seoul’s Yongsan station to Gwangju Songjung are likely to be 46,800 won, up 9,000 won from the current price.

According to the Korea Transport Institute, more than 50 percent of passengers who used to travel by plane for the Seoul-Gwangju route are expected to opt for the bullet train due to cheaper tickets.

Modified KTX-Sancheon trains will be used on the route, with the trains featuring more legroom and electrical outlets at each seat.